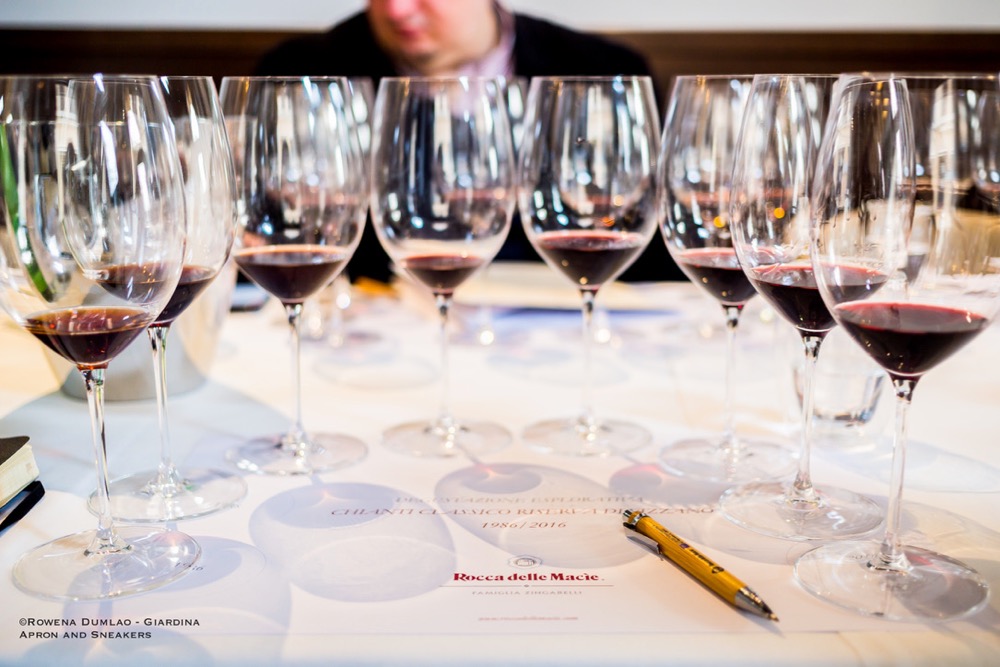 It’s not common to have a big film producer jump to being a wine producer and excel in both fields. In the case of Italo Zingarelli, the man behind the internationally popular series of Bud Spencer and Terence Hill series of films, he proved his proficiency in the two things that he was most passionate about. In 1973, he made the big plunge by acquiring the Le Macie estate in Chianti, all 93 hectares of them in which two hectares were dedicated to the cultivation of grape vines while the rest were left for olive groves.

This was just the beginning as his love for wines and the land of Chianti were instilled also to his children, Fabio, Sandra and Sergio.

But it was Sergio, the youngest, who confronted the responsibility and challenge of enlarging the company from the initial size to the current 600 hectares.

Along with the fundamental collaboration of his sister Sandra and wife Daniela, they established the estate’s importance in the oenological world both in Italy and abroad. The third generation of the family, Sergio and Daniela’s children, Andrea and Giulia, have also entered the team. Two of the other key players of the winery areLuca Francioni who functions as the oenologist and Alfio Auzzi as the agronomist.

Rocca delle Macie has 600 hectares of land in which 200 are used for the cultivation of grape vines while 22 are cultivated with olive trees.

These are divided among the six estates of the company in the Chianti Classico and Maremma areas. In the Chianti Classico area of Le Macie, Sant’Alfonso, Riserva di Fissano and Tavolelle, the vines cultivated are exclusively the red grape varieties for the Chianti Classico. As for Maremma, the coastal part of Tuscany, there are Campomaccione and Casa Maria Estates and the varieties cultivated are Vermentino and the red grape varieties for the Morellino di Scansano. Viticulture is strictly organic with the use of non-chemically derived fertilizers and pesticides. Rocca delle Macie produces 15 different types of wine, grappa, vin santo and biological extra virgin olive oil. The production of wines is distributed in about 50 countries.

Being such a vast land, the estate also houses Relais Riserva di Fizzano, an 11th century hamlet (borgo) located on the hilltop of Fissano, in the heart of the Chianti Classico zone. The hotel is comprised of 19 Tuscan-style serviced-apartments equipped with fireplaces each.

The whole hamlet had undergone a meticulous refurbishment to maintain most of its original 1000 year-old architectural structures.

To complete the circle of full immersion in a Tuscan vineyard setting, a restaurant in the premises provides dinner daily serving traditional dishes.

On the 25th of January 2019, Sergio, along with his sister Sandra Zingarelli, took bottles of their wines to Pipero Roma in Rome for a private tasting for a group of us specializing in the field of wine.

The dishes paired with the wines were prepared by Chef Ciro Scamardella of Pipero Roma.

The principal vines cultivated here are Sangiovese with a minority of Cabernet Sauvignon, Merlot and Colorino.

The soil is rich with Miocene deposits with a sandy-loamy texture and calcareous with a southern exposure. It has an ideal microclimate with good ventilation and good maturation of the grapes that yields an elevated quality of production.

The earlier vintages of 1986 and 1988 came from the old vines that were already present during the purchase of the land in 1984 and over the succeeding years, new plots of vines were planted and these are where the later vintages are procured from. Grape varieties blended with Sangiovese vary depending on the year with white grape varieties of Trebbiano and Malvasia included in the earlier vintages along with Canaiolo, Cabernet Sauvignon and Merlot. In the vintages from 1986 to 2001, the wines have displayed a good pace of evolution with regards to the three aspects of analyses, the appearance, nose and palate. The colors from 1986 to the later vintages start from limpid orange red to garnet red towards its characteristic ruby red in the much younger years.

Although the 1986 and 1988 have passed through time of 33 and 31 years respectively and reached their maturity, the wines allow a beautiful perception of the quality in the palate. The acidity is still apparent with notes of sapidity, trace of tannins and good persistence in the mouth. The 1988 shyly opens up while the 1986 was more overt with its characteristics especially the preserved stone fruits in the mouth and has acquired Madeira-like characteristics. The garnet-colored 1995, displays more subtle characteristics in the nose and mouth than the first two, displays a good structure and complexity in the nose with the prevalence of cooked stone fruits. The 2001 vintage, harmonious, shows a vibrant appearance of limpid ruby red color with nuances of garnet. In the nose and palate it is ample in complexity wherein the varietal characteristics of flowers and mature fruits are quite evident along with secondary and tertiary characteristics of nuts, chocolate, tobacco and leather. Its acidity is quite prevalent with moderate tannins.

The new denomination of Chianti Classico Gran Selezione commences from the 2011 vintage with the grapes cultivated from the estate’s cru, the historical Riserva di Fizzano.

The 2011 and 2013 are blends of Sangiovese at 95% and 5% Merlot while with the 2015 and 2016, Merlot was replaced by Colorino with different small percentages depending on the year. The vibrant limpid ruby red wine displays gradual and well-paced evolution in all four vintages, varying in the strength of the perceptibility of the three levels of characteristics. They are complex in both nose and palate, tannic, show good acidity and sapidity, roundness and long persistence in the mouth. The varietal characteristics of Sangiovese are quite distinct especially in the 2011 where roses were most evident while with the others, violet was more noticeable. Dried tea leaves, balsamic and sweet spices spring out the most in the 2013 and in the 2015 vintages. Whereas the preview of the 2016 (to be released in June 2019) gives a chewy mouthfeel and beautiful clarity in the nose and mouth with the evidence of youth. It can age very well in the succeeding long years wherein the edges can smoothen well.

This site uses cookies to improve your browsing experience. To understand which cookies and how they are used, consult our Privacy page. Accept cookies by clicking on the 'Accept' button. At any time you can review and change your consent by clicking on "Manage consent". Read More
Cookie settingsReject AllAccept
Manage consent

This website uses cookies to improve your experience while you navigate through the website. Out of these, the cookies that are categorized as necessary are stored on your browser as they are essential for the working of basic functionalities of the website. We also use third-party cookies that help us analyze and understand how you use this website. These cookies will be stored in your browser only with your consent. You also have the option to opt-out of these cookies. But opting out of some of these cookies may affect your browsing experience.
Advertisement
Advertisement cookies are used to provide visitors with relevant ads and marketing campaigns. These cookies track visitors across websites and collect information to provide customized ads.
Analytics
Analytical cookies are used to understand how visitors interact with the website. These cookies help provide information on metrics the number of visitors, bounce rate, traffic source, etc.
Functional
Functional cookies help to perform certain functionalities like sharing the content of the website on social media platforms, collect feedbacks, and other third-party features.
Necessary
Necessary cookies are absolutely essential for the website to function properly. These cookies ensure basic functionalities and security features of the website, anonymously.
Others
Other uncategorized cookies are those that are being analyzed and have not been classified into a category as yet.
Performance
Performance cookies are used to understand and analyze the key performance indexes of the website which helps in delivering a better user experience for the visitors.
SAVE & ACCEPT